Why Bonds Should Still Play a Role in Your Portfolio

Even during periods of rising interest rates, they can still help control risk.

Bonds are suddenly the asset class everyone loves to hate. In response to the resurgent inflation that started in late 2020, the Fed has hiked interest rates four times so far in 2022, raising rates by a total of 225 basis points. In response, bonds have suffered some of their worst losses in decades. In the first six months of 2022, for example, the Bloomberg U.S. Aggregate Bond Index dropped 10.35%—its worst showing in more than four decades.

The pain might not end right away. The Federal Reserve is taking aggressive steps to tamp down inflation and has said that it plans to continue raising rates at least through September before potentially pausing to see how well rate increases are working to control inflation. In response, fixed-income investors have headed for the exits; net outflows for taxable- and municipal-bond funds totaled more than $230 billion for the first seven months of 2022.

But investors shouldn't give up on bonds altogether. Fixed-income securities still play a critical role in reducing portfolio risk and can also prove surprisingly resilient, even during periods of rising interest rates.

Bonds' ability to control risk is partly because they're fundamentally different from stocks. Bondholders receive periodic interest payments in exchange for lending money to the bond issuer. Bonds also rank higher in the capital structure than stocks, meaning their owners are among the first to be paid in the event of bankruptcy. Stocks, on the other hand, might pay dividends, but any payments to shareholders are optional. And stocks are on the bottom rung of the capital structure: If a company is liquidated, equity holders are the last to be paid with whatever assets are left over.

Bonds are inherently less risky because their owners get more of their cash flows up front and have more certainty about receiving a given value at maturity. Their value primarily hinges on two things: the issuer's underlying credit quality and changes in market interest rates. As residual assets, stocks have much more upside potential, but they are guaranteed to be riskier. Their value is less straightforward, too, since it ultimately depends on the present value of cash flows that must be modeled many years into the future.

As a result, bonds typically have much steadier performance than equities. Since 1926, for example, stocks have suffered 119 quarters of negative returns. During about two thirds of those periods, bonds had positive returns. What's more, the magnitude of losses for bonds is typically far less, as shown in the table below. 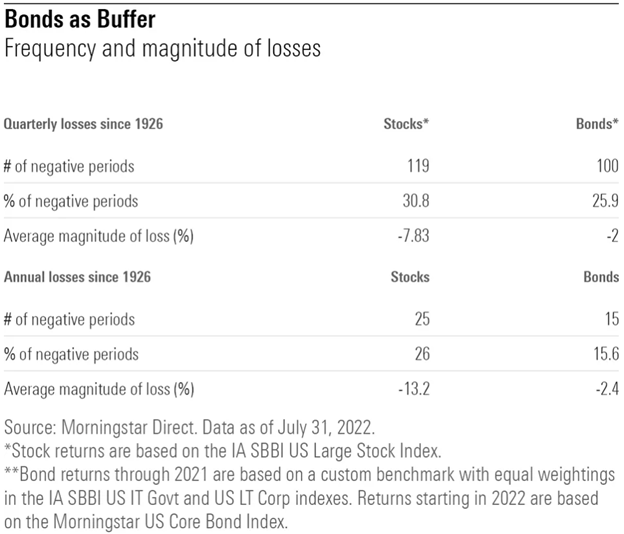 Bonds can also provide diversification benefits thanks to their generally low correlations with stocks. Even during periods of rising interest rates, bonds usually have a lower correlation with stocks than most other major asset classes, which enhances their ability to reduce risk at the portfolio level. Our analysis of previous stress periods for inflation and interest rates indicates that stock/bond correlations have rarely increased above 0.6, and then only during the most acute periods of rising rates and/or inflation. As a result, bonds can still play an important role in reducing portfolio risk even during periods of weaker fixed-income performance.

It's a given that rising interest rates are bad for bonds: If investors can purchase a newly issued bond with a higher interest rate, previously issued bonds with lower yields are worth less. That's mathematically true, but it's not the end of the story. Witness the fact that it's relatively rare for bonds to suffer two or more consecutive years of losses, even during periods of rising interest rates. That has only happened twice since 1926: in 1955-56 and 1958-59. In both periods, cumulative losses over the two-year period were relatively mild (3.7% and 2.4%, respectively).

This resilience stems from the critical role of yield in bond returns. Investors who purchase individual bonds and hold them to maturity will eventually be made whole when they redeem their holdings at par. They can then invest the proceeds at a higher interest rate, leading to better returns for future bond holdings. This is one of the reasons bond ladders can serve individual investors well: A bond ladder not only helps them match the duration of assets and liabilities, but allows them to benefit from rising rates over time.

This "self-healing" mechanism, as Hartford Funds' Joe Boyle describes it [1], gets even more interesting in the context of bond funds. A fund manager who holds bonds with many different maturity dates will reinvest the proceeds as they mature. That allows for clipping more generous coupons during periods of rising interest rates, leading to better future returns. As Boyle points out, this process means some of the most rewarding periods to invest in bonds can occur after significant rate increases.

To see how this plays out in practice, I looked at the 10 worst quarters for a custom bond benchmark going back to 1926. As shown in the table below, returns for the subsequent 12-month period were positive for seven out of the 10 periods. (Notably, the 12-month period following the bond market’s poor showing in the first quarter of 2021 was not one of them). 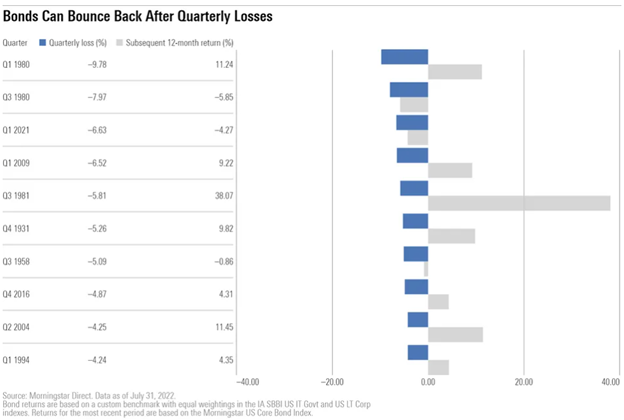 The upshot: While bond returns sometimes take a while to recover, it's almost certainly a better time to invest in bonds than it was couple of years ago now that yields on the 10-year Treasury have risen by more than 200 basis points from their nadir in early 2020. As previous research has found [2], there's a strong relationship between current bond yields and future long-term returns for bonds. While bond yields remain relatively low compared with long-term averages, they're significantly better than they've been in the recent past.

Granted, if inflation proves more stubborn than the market is currently expecting, there could still be tough times ahead for fixed-income investors. In addition, the diversification value of bonds has recently diminished as correlations between stocks and bonds have flipped into positive territory. If that pattern continues, bonds will play a less valuable role in improving risk-adjusted returns at the portfolio level.

Even so, investors shouldn't react too harshly to the recent turmoil in the bond market. Bonds can—and should—still play a critical role in reducing risk.