Do Bear Markets Lead to Recessions?

In case you missed the news, U.S. stocks have officially entered a bear market. On Monday, their cumulative decline since Jan. 3, as measured by the major large-company indexes (my source is the Morningstar US Market Index, but the S&P 500 or Wilshire 5000 indexes performed similarly), totaled 22.5%. As bear markets are by tradition defined as losses exceeding 20%, the dubious honor was achieved.

This is the seventh bear market of the past half century. The previous six were:

Five of those six bears accompanied recessions. The exception was Oct. 19, 1987, when U.S. equities plunged 22%, thereby convincing many employers that an economic slump loomed. (O frabjous day! My company shelved me five weeks later. I scrambled to find a new position at a tiny startup called … Morningstar.) However, the thunder brought no rain.

So far, so bad. To judge by the admittedly small sample size, bear markets have been accompanied by recessions on 83% of occasions.

However, this initial impression requires an asterisk. For one, the technology-crash recession was bupkis, lasting only eight months and reducing the nation’s real gross domestic product by 0.3%. Technically, the period met the National Bureau of Economic Research’s recession requirement, but the economy was only temporarily sluggish, rather than deeply troubled.

For another, the official definition of a bear market omits four instances when stocks lost more than 18% but less than 20%, those being the summers of 1990, 1998, and 2011, and autumn 2018. The first of those periods was attended by a mild recession. The other three, as with Black Monday, were false alarms.

Thus, lightly loosening the bear-market standard by establishing the qualifying hurdle at 18% makes for a considerably happier prognosis. Ten times during the past half century, U.S. stocks have fallen by at least 18%. Four of those stock market slumps cried wolf; two accompanied mild recessions; and four were associated with the real thing. By this measure, the odds of a truly bad outcome decline to 40%, as opposed to the original 83%. Better news indeed.

The U.S. stock market is generally regarded as a leading indicator, meaning that its performance signals what will come. Often, equity prices do serve as economic guides. For example, even as COVID-related concerns mounted in April 2020, the stock market rallied, foreseeing the eventual return of corporate profitability. Does the same hold true, I wondered, for bear markets and recessions?

So asked this column’s headline—and the answer surprised me. As it turns out, the start of bear markets may anticipate economic slides, but when the bear actually arrives, as measured by the 20% threshold, recession has begun. The following chart depicts the number of months that separate the previous bear markets from the recessions they accompanied. In all cases besides March 2001, the amounts are negative. Bear markets did not lead the economy; they lagged it. 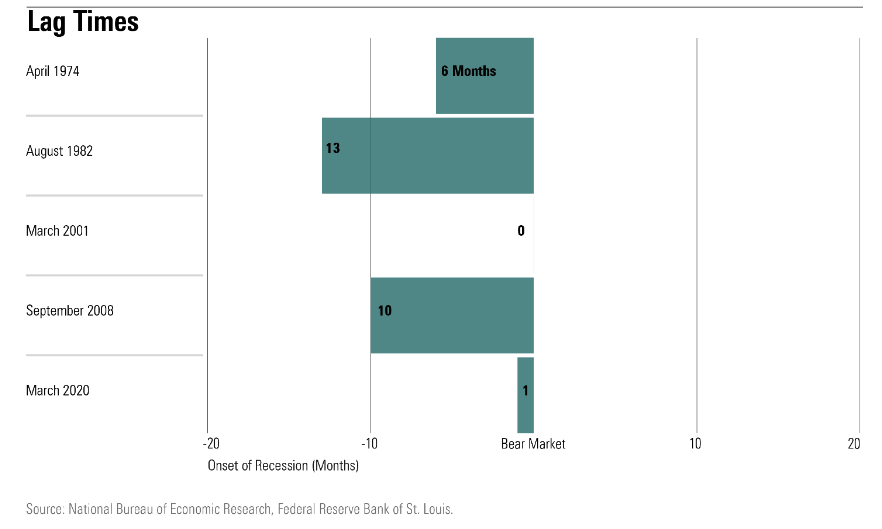 For the most part, the economic problems were already apparent when the bear arrived. In 1974 and 2008, the economy was in the midst of suffering its second down quarter out of three attempts. The situation in 1982 was more obvious yet, with the bear market occurring as the recession entered its second year. Only in 2001, when the recession was gentle, and in 2020, when it arrived very abruptly, did the economy not lead the stock market. On those occasions, the events were concurrent.

The question then becomes, are stocks today following the progress of the economy? Hard to say. Per the Bureau of Economic Analysis, real GDP contracted by 1.5% during this year’s first quarter. If that trend were to continue, then this bear market would fit the usual pattern, by materializing several months after a recession began. However, most researchers—as evidenced by this June 15 release from The Conference Board—believe that second-quarter GDP will be positive. Perhaps their estimates will prove overoptimistic. But as of now, the signs of a recession are further removed than they were during the bear markets of 1974, 1982, and 2008. 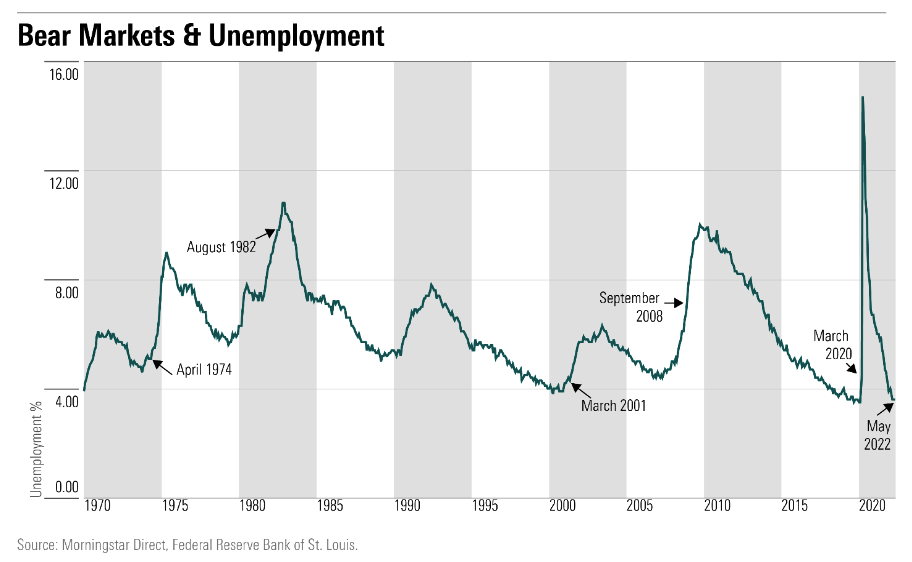 Save for early 2020, when COVID’s onslaught simultaneously torpedoed both unemployment and stock prices, unemployment in recessions that are accompanied by bear markets has always increased for several months before stock market losses exceeded 20%. (To cite one example, the April 1974 bear market occurred after five consecutive months of rising unemployment.) If this bear market does end up coinciding with recession, the signal provided by the unemployment rate will be distinctly different than with past occurrences.

A quick examination of the evidence suggests that bear markets typically imply that recessions are already upon us. However, viewing the matter more broadly, by 1) relaxing the definition of a bear market, 2) differentiating between mild and severe recessions, and 3) considering both GDP-growth and unemployment rates, alters that conclusion. While a 2022 recession certainly could occur—and becomes a stronger possibility with each interest-rate increase by the Federal Reserve—history suggests that the current bear market is likely a false alarm.