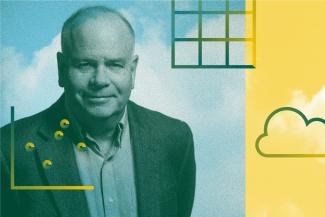 Better Stocks Than Bonds in Retirement

A history of asset allocation for retirees.

For those who save for retirement, the best asset allocation is that which provides the highest returns, with an acceptable level of risk. However, risk-adjusted returns don't directly address the needs of those who are retired, because they tend to consume rather than accumulate. What matters most for those who have ceased working is not portfolio growth, but instead spending power.

Consequently, the quality of a retiree's allocation is customarily evaluated by the withdrawal rate that it permits. What percentage of assets can the retiree safely spend? The answer to that question contains several moving parts, including: 1) the retiree's life span, 2) the variability of spending, and 3) the rate of investment return. Typically, the problem is simplified by fixing the first two inputs. The life span is set at 30 years, and the spending plan is static, with each year's withdrawal matching the previous year's amount, after adjusting for inflation.

The following chart depicts safe withdrawal rates for U.S. investors over the past 80 years, for three asset allocations: 1) an aggressive portfolio consisting of 100% stocks, 2) a moderate portfolio that holds 50% stocks, 40% bonds, and 10% cash; and 3) a conservative portfolio that contains 90% bonds and 10% cash. The figures are derived by simulating 1,000 potential market performances, using the average returns and standard deviations that stocks, bonds, and cash recorded during those eras, along with the rate of inflation. The safe withdrawal rate is defined as the highest amount that can be removed for all 30 years of the simulations without depleting the portfolio in at least 90% of the simulations. 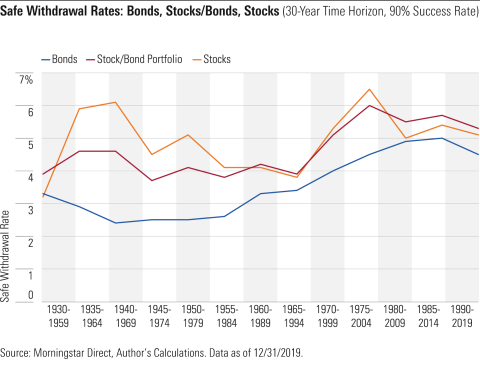 (Note: My estimates are somewhat lower than those computed by Bill Bengen in his seminal 1994 paper, "Determining Withdrawal Rates Using Historical Data." The discrepancy arises because Bengen evaluated the single outcome of history, whereas I considered additional possibilities.)

Save for the initial period of 1930 through 1959, the seemingly rash strategy of investing of entirely in equities consistently surpassed holding only bonds. Happier yet was the middle road. Not once did the safe withdrawal rate for the bond allocation land within half a percentage point of the moderate portfolio. No matter what the crisis--the Great Depression, the stagflation of the '70s, or the new millennium's technology-stock crash--possessing a meaningful stake in stocks helped retirees with a 30-year time horizon, rather than hurting them.

Overall, the performances of the aggressive and moderate portfolios have been roughly similar, as measured by safe withdrawal rates. The aggressive allocation led the way through most of the early years, as equities recovered from their Great Depression lows. Results were mixed over the next quarter century. Most recently, the stock/bond blend has moved ahead. The critical decision has not been how many equities to hold, but rather to own them at all.

Although capital appreciation is not the main aim for most retirees, save for those who are so wealthy (or who possess such modest needs) that they need not worry about overspending, it nevertheless is a useful consideration. More assets means greater financial flexibility. Retirees can use their extra monies to give themselves raises, pay unexpected bills, or donate to charities. They may also choose to leave larger bequests.

For this secondary goal of capital growth, equities are paramount. The next chart illustrates the point. It portrays the median final values for the investment pools--that is, the median amount of assets that remain at the end of the rolling 30-year periods, after the required withdrawals have been funded. For comparison's sake, each calculation assumes the same 4.0% withdrawal rate. 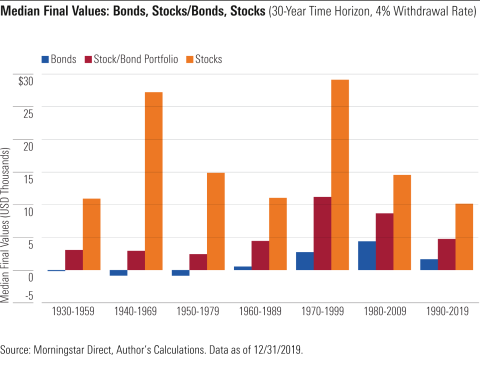 Stocks, stocks, and more stocks! By this measure, the competition between the aggressive and moderate portfolios is no contest. Across all periods, the 100% equity allocation steamrolls any strategy that contains bonds. That even occurred from 1930 though 1959, when the safe withdrawal rate for the all-equity portfolio was almost a full percentage point below that of the stock/bond allocation.

Equities look much stronger because the second chart shows median values, rather than the relatively poor result of the 90th percentile that was used for the withdrawal rate chart. Back in the day, retiree plans implicitly assumed median outcomes, but following criticism from Nobel laureate William Sharpe, among others, habits changed. These days, most retirement-planning programs target a high success rate. My routine was no exception.

While there's much to be said for the new custom--few retirees would willingly agree to plans that were expected to fail half the time!--it does contain a significant drawback. By basing the investment decision entirely on avoiding bad results, the conservative approach ignores other outcomes. Dodging investment disaster is a fine goal. But it should not constitute the full analysis.

Besides highlighting a previously hidden advantage of the 100% equity portfolio, the second chart further demonstrates the danger of relying solely on bonds. Not only have fixed-income allocations generally struggled to create wealth, but during some 30-year periods, even their median result hasn't been sufficient to fund a 4% withdrawal rate. For retirees seeking to spend an adequate amount while keeping pace with inflation, bonds have been distinctly unsafe.

History's lesson is straightforward: the more stocks, the merrier. Investing entirely in equities consistently generated either the highest safe spending rate for a given 30-year period, or a rate that wasn't far off the mark. What's more, all-equity portfolios were much likelier to deliver a happy surprise than to disappoint.

Should the future resemble the past, the lesson will remain valid. Retirees should invest heavily in equities, most likely more than they currently do. But the advice rests upon that initial assumption. Next Tuesday's column will look forward rather than backward, by exploring how the next time might be different.

John Rekenthaler (john.rekenthaler@morningstar.com) has been researching the fund industry since 1988. He is now a columnist for Morningstar.com and a member of Morningstar's investment research department. John is quick to point out that while Morningstar typically agrees with the views of the Rekenthaler Report, his views are his own.